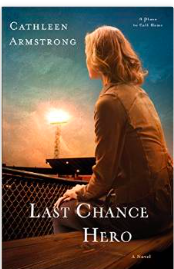 Cathleen Armstrong’s fourth and final installment of her series, A Place to Call Home, will be available September 15, 2015. If you missed the previous three books, you have some catching up to do!

In Last Chance Hero, the inhabitants of Last Chance, New Mexico, could not be more pleased. Dr. Jessica McLeod has opened an office right on Main Street. Andy Ryan, the best athlete the little town ever produced, has ended his short career in the NFL and has come home to coach the mighty Pumas of Last Chance High. Unfortunately, Dr. Jess immediately gets off on the wrong foot when she admits that she’s never seen a football game, isn’t really interested in doing so, and, in fact, doesn’t know a first down from a home run. Meanwhile, Coach Ryan is discovering that it’s not easy to balance atop the pedestal the town has put him on. When this unlikely pair is drawn together over the future of a young player–whose gifts may lie in the laboratory rather than on the football field–they begin to wonder if they might have a future together as well.